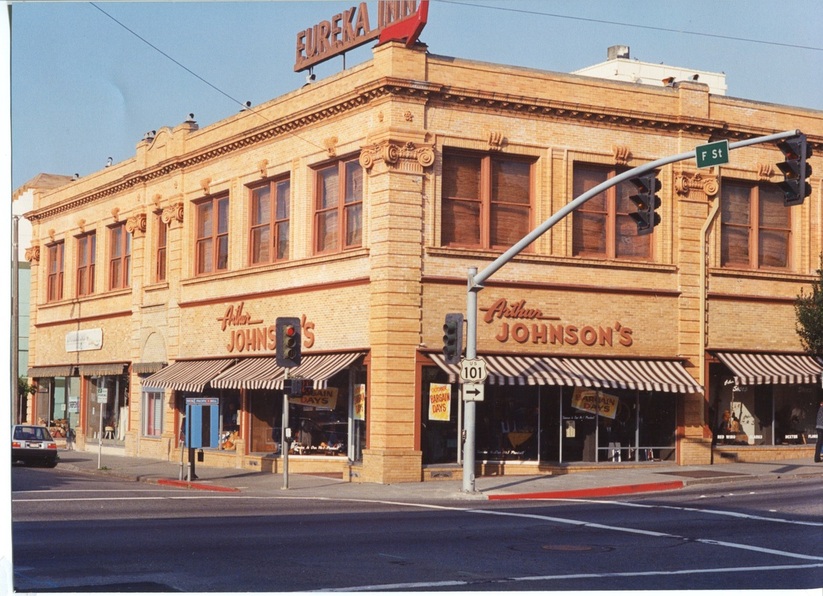 Arthur Johnson's, Humboldt County's finest men's full service clothing store closed on July 27, 1995. That terminated seventy-five years of merchandising. When it closed, the owners Art (Thanos) Dalianes and Jack Nash (grandson of Arthur Johnson) declared the business a victim of changes in dress codes, the economy and downtown Eureka. The owners are proud of the store's reputation and its part in the history of Eureka.

Arthur Johnson was the only child of Mary and Nils Eric Johansen, immigrants from Sunsvall, Sweden. They changed the name to Johnson upon arrival in the US. Arthur, born in 1892 in Greenwood, came to Eureka with his parents on a ship from Elk in 1893. Nils Eric worked for the Vance Lumber Company and the family owned a boarding house at 816 2nd St.

Arthur quit school after completing the 8th grade and went to work for Daly's. He had a fondness for men's clothing and then went to work at C.V. Jackson's at 406 2nd St. for three years. At Jackson's he learned sign painting and display. Arthur joined the Navy and did patrol in San Francisco and the Far East. In June of 1919 he was released and returned to work again for Daly's. He worked as a window trimmer and display manager.

On February 14, 1920 he rented a storefront from Mrs. Ricks at 203 "F" Street, got a loan from Christy Palmtag at the Bank of America, and started a business. One of his best customers was Cornelius Daly. 1920 was a big year for Arthur Johnson as he married Madeline Coonan, daughter of James Francis Coonan, on September 5th. They bought a lot at 1335 "H" Street and had a house built in 1926 by Edgar Lax.

Arthur and Madeline had two children, Jeanne Marie Johnson (Nash) and Donn Arthur Johnson. However, tragedy struck in December of 1927 when Madeline, sick for six months, passed away. In August of 1928 Arthur met a local teacher, Clare Wagner, and they were married the following spring. In 1930 Clare gave birth to Janeth Ann Johnson (Nix). All of the children worked at one time in the store.

Arthur moved to the Gross Building at 5th and "F" in 1931. It was next to the Bon Boniere. The store survived the Depression and it began to prosper. Arthur’s son Donn returned from the service in 1946 and began working in the store. Jeanne had married an Oregonian named Dick Nash. In 1945 Dick was invited to help at the store and he enjoyed it so much he decided to make it a career. In the mid 1950's Arthur sold the store to Donn and Dick and they took the store through several expansions including purchasing Ned's Menswear in Arcata. In 1970 they took over the former Hornbrook's Shoes location on 5th Street.

In September of 1970 Jack Nash returned from the service and started to work in the store. Old friend Art Dalianes, who had worked part-time for Johnson's in 1960, was managing the Roos Atkins store at Post and Powell in San Francisco in 1972. Dick, Donn & Jack convinced Art to return home and become a partner in the store. He did so in January 1975.

Art and Jack entered into the partnership in 1977 and bought out Dick and Donn in the 1980's. They were prime business years and the store did very well. Eventually the Bayshore Mall was developed and the retail landscape of Eureka began to change. Art and Jack discussed their future for a couple of years before making the decision to close the store in the middle of 1995. They felt very secure in their decision.