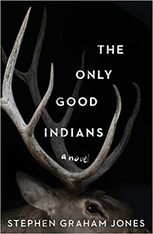 October's read is The Only Good Indians by Stephen Graham Booth.

From New York Times bestselling author Stephen Graham Jones comes a novel that is equal parts psychological horror and cutting social commentary on identity politics and the American Indian experience. Fans of Jordan Peele and Tommy Orange will love this story as it follows the lives of four American Indian men and their families, all haunted by a disturbing, deadly event that took place in their youth. Years later, they find themselves tracked by an entity bent on revenge, totally helpless as the culture and traditions they left behind catch up to them in a violent, vengeful way.

Feeling spooky? Join the Clarke for our chilling Halloween read on October 9th at 3:00pm via Zoom!

Enjoy our book club? Consider donating to help us continue offering these programs!

The Bookworms' Past Reads 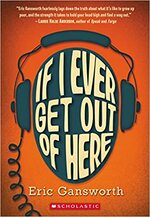 Lewis "Shoe" Blake is used to the joys and difficulties of life on the Tuscarora Indian reservation in 1975: the joking, the Fireball games, the snow blowing through his roof. What he's not used to is white people being nice to him -- people like George Haddonfield, whose family recently moved to town with the Air Force. As the boys connect through their mutual passion for music, especially the Beatles, Lewis has to lie more and more to hide the reality of his family's poverty from George. He also has to deal with the vicious Evan Reininger, who makes Lewis the special target of his wrath. But when everyone else is on Evan's side, how can he be defeated? And if George finds out the truth about Lewis's home -- will he still be his friend?

Today in the United States, there are more than five hundred federally recognized Indigenous nations comprising nearly three million people, descendants of the fifteen million Native people who once inhabited this land. The centuries-long genocidal program of the US settler-colonial regimen has largely been omitted from history. Now, for the first time, acclaimed historian and activist Roxanne Dunbar-Ortiz offers a history of the United States told from the perspective of Indigenous peoples and reveals how Native Americans, for centuries, actively resisted expansion of the US empire. 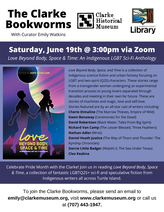 Love Beyond Body, Space, and Time is a collection of indigenous science fiction and urban fantasy focusing on LGBT and two-spirit characters. These stories range from a transgender woman undergoing an experimental transition process to young lovers separated through decades and meeting in their own far future. These are stories of machines and magic, love and self-love. 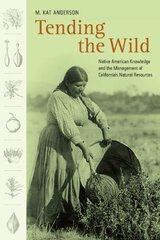 May's read was Tending the Wild,  Native American Knowledge and the Management of California's Natural Resources.
M. Kat Anderson presents a wealth of information on native land management practices gleaned in part from interviews and correspondence with Native Americans, who recall what their grandparents told them about how and when areas were burned, which plants were eaten, and which were used for basketry, and how plants were tended. The complex picture that emerges from this and other historical source material dispels the hunter-gatherer stereotype long perpetuated in anthropological and historical literature. We come to see California's indigenous people as active agents of environmental change and stewardship. Tending the Wild persuasively argues that this traditional ecological knowledge is essential if we are to successfully meet the challenge of living sustainably. 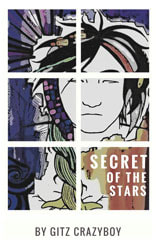 April's read was  Secret of the Stars, about a young man's journey to find four fallen stars. After watching the stars falling to earth, he is whisked into the land of dreams where he is told that the discovery of each star will also reveal one of life's many secrets. A voyage that takes him across distant lands, into the realm of dreams, and back again. Ultimately the young man begins to understand the deeper purpose of why he was put on this path and what finding all the stars truly means. A story about the wondrous places your dreams can take you. 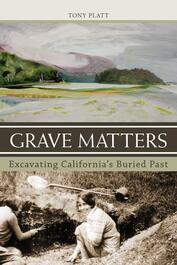 March's read was Grave Matters , the history of the treatment of native remains in California and the story of the complicated relationship between researcher and researched. Tony Platt begins his journey with his son's funeral at Big Lagoon, a seaside village in pastoral Humboldt County in Northern California, once O-pyúweg, a bustling center for the Yurok and the site of a plundered native cemetery. Platt travels the globe in search of the answer to the question, How do we reconcile a place of extraordinary beauty with its horrific past? Grave Matters centers around the Yurok people and the eventual movement to repatriate remains and reclaim ancient rights, but it is also a universal story of coming to terms with the painful legacy of a sorrowful past.

February's non-fiction selection, Me Sexy, is a selection of thought-provoking essays dealing with Indigenous sexuality. Cree really the sexiest of all languages? Do Native people have less or more public hair? Does Inuit sex have a dark side? These are some of the questions answered in this witty, thoughtful collection. Twelve important voices in the Native culture — including Joseph Boyden, author of Three Day Road, and Marissa Crazytrain, a descendant of Chief Sitting Bull — tackle a variety of previously taboo subjects with humor and insight. Noted comic writer and editor Drew Hayden Taylor wraps it up with an original contribution of his own. 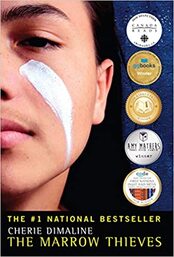 The Marrow Thieves, February's fiction read, is an engrossing YA Dystopian novel set in a future where humanity has nearly destroyed its world through global warming.  And now, an even greater evil lurks. The indigenous people of North America are being hunted and harvested for their bone marrow, which carries the key to recovering something the rest of the population has lost: the ability to dream. Highly recommended for all ages! 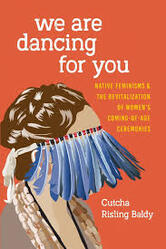 January's non-fiction selection, We Are Dancing For You focuses on the revitalization of women's coming of age ceremonies in Northern California, specifically in the Hupa tribe; it talks about the power of reclaiming these ceremonies and the positive impact it has on these communities. 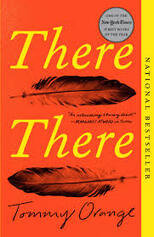 There, There, January's fiction selection, looks at the lives of different Native folks living in the bay area (Urban Indians) and the way their stories come together at a powwow in Oakland. It was a finalist for the 2019 Pulitzer Prize.