How To Wear a Dress: Photo Documentation of Regalia 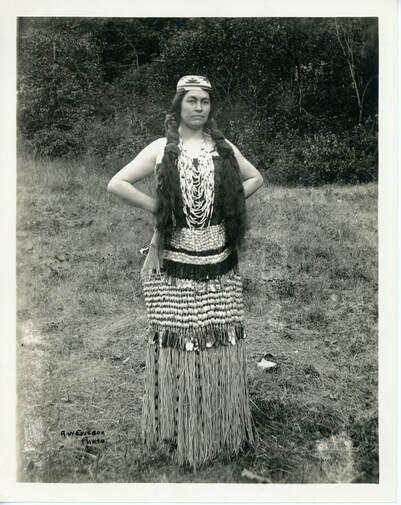 How to Wear a Dress:
In photography of women’s ceremonial dresses locally, at times there will be a model wearing the dress in a peculiar way.
​In this photograph, Matilda Kruger wears the skirt of the dress across the front of her hips. Draped across the front of her chest is the apron of the dress.
The most logical reason behind wearing a dress in this manner was to document the entire dress for photography’s sake. Questioning historic photos such as this gets closer to a more authentic lens for viewing Indigenous culture and traditions. 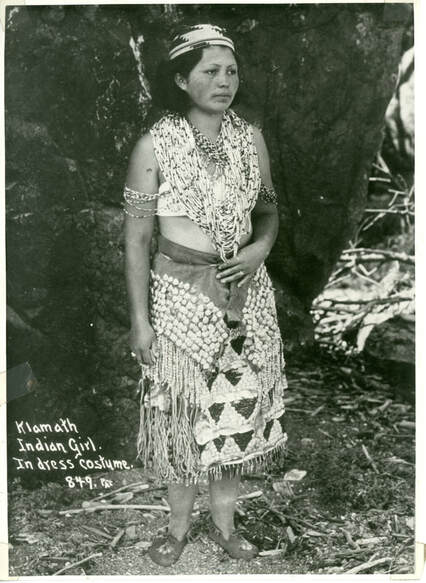 ​“Costume” vs Regalia:
Some photography of the late 1800’s through the early 1900’s of Native Americans was created for a tourist trade. These photographs contextualized their Indigenous subjects in ways that were not always completely true. The text on this photo reads:

"Klamath Indian Girl. In dress costume. 849. Pat."
​
Handwritten text on the backside identifies the woman modelling as 'Little Alice' Taylor Hodge Lewis from Rekwoi, she was Yurok.
Within Indigenous cultures there is an inherent sacredness of regalia and other ceremonial items due to how they were used and intended to be. The word “Costume” comes with connotations of fakery and play. When referring to actual ceremonial items, the term “Regalia” is more consistent with the intent of the item.