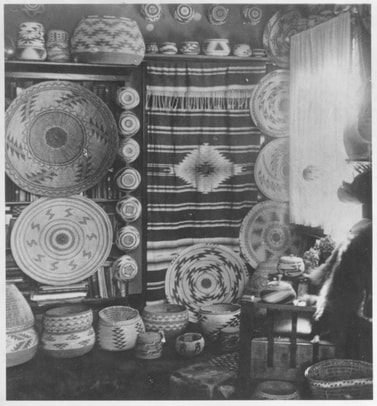 Hover Collection at Elsie Hover's home
By the late 1800's the region now known as Humboldt County grew as new populations flocked to the area. This influx of peoples created friction with  various skirmishes, massacres, unfortunate government policy, and more incidents irreparably changed the ways of life for tribal peoples. This new world that came into the region brought with it a curiosity of native arts and culture, as well as new ways of adapting to the new culture around them. Weavers sold baskets to make money to buy food with, as gathering and hunting rights were interrupted, this back and forth of trade created a new market.

Alongside this clash of worlds, outside Northern California, the Arts and Crafts Movement was creating a desire for all things handicrafted. Within the American movement, started in Britain in the late 1800's, were links to nationalism and all things Americana. This translated to interested in the "primitive" as a symbol of America, and a renewed interest in collectible Native American Culture.

Collectors of Native American basketry, regalia, and artifacts might have a singular basket, or some with more funds would have a whole section of their house devoted to their collection.
​
Locally this translated to a trade being solidified between the weavers and the local goods store of the region, A. Brizards. 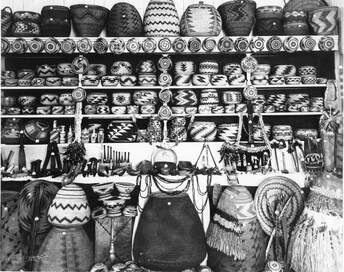 With the new trade of baskets, weavers created new object shapes and designs to adapt to this euro-american desire for an indigenous aesthetic. ​Lila O'Neale, author of Yurok-Karok Basket Weavers, conducted interviews in 1930 with weavers along the Klamath River. In this glimpse at the basket trade, she captured information on what was regarded as traditional and what were seen new innovations.

These new trade baskets were not the traditional designs or even traditional forms of baskets that are more seen today as utilitarian or ceremonial, like hoppers, ceremonial caps, jump dance baskets. Instead what was often traded were fancy or trinket baskets, that had previously held a place as a type of gift basket. They were made, as O’Neale relates in, as a form of repayment.

“There is no conventional type, size, or decoration for this...occasionally a recipient is informed she is to have a gift and is asked to choose a design for it. A weaver’s best work is taken for granted by both donor and recipient. Sentiment is not lacking, however; in a country where few baskets are without price, a gift basket will not be sold. If two baskets are exchanged by friends, neither woman will part with hers, considering the basket a gift.” (P 41)

​O'Neale identified weavers whose identities and baskets we can track today at times, seen in the cases at the Clarke. They spoke about weaving for the trade, the new trinket basket forms - baskets made not for traditional or utilitarian purposes and specifically for trade. Weavers discussed what types of designs sold better than others, and new forms they were making. Elizabeth Hickox, renowned basket weaver, spoke about the taller knobs she became known for on her lidded trinket baskets. Designs regarded as newer or inventions for trade can be seen in the section on Highlighted Designs.
Trade outside the region: Baskets made it outside the region through Brizards, and other curio dealers like Grace Nicholson who took on basket weavers like Nettie Ruben, Elizabeth and Louisa Hickox. Her highlighting, and seeming "taste making" ability sold the Northern California region to collectors against the backdrop of collectible Pueblo pottery, Navajo weaving, and Pomo feathered baskets.

Sadly, the vigorous basket trade dwindled in the face of the great depression in the late 1920's. Weavers continued making baskets, a new generation of weavers as large as the last wasn't forthcoming however. Federal Indian policy as well as other assimilationist policies made for the passing on of traditions such as basket weaving difficult. There would be another cultural Renaissance in a way, later in the 1960's-80's.

For more detailed information on trade baskets, and the curio trade of Native American baskets see: