The Clarke Quilts and Their Stories

The Clarke Museum has a locally significant quilt collection, which over time has been graciously supported by community members through donations of quilts and organizations like the Redwood Empire Quilters Guild, which has funded multiple projects through their Humboldt Area Foundation fund. The Quilts are from this community, and because of that, they tell important stories about what was important to people here, and how the community came together for meaningful events, shared family lore, and the passage of heirlooms. 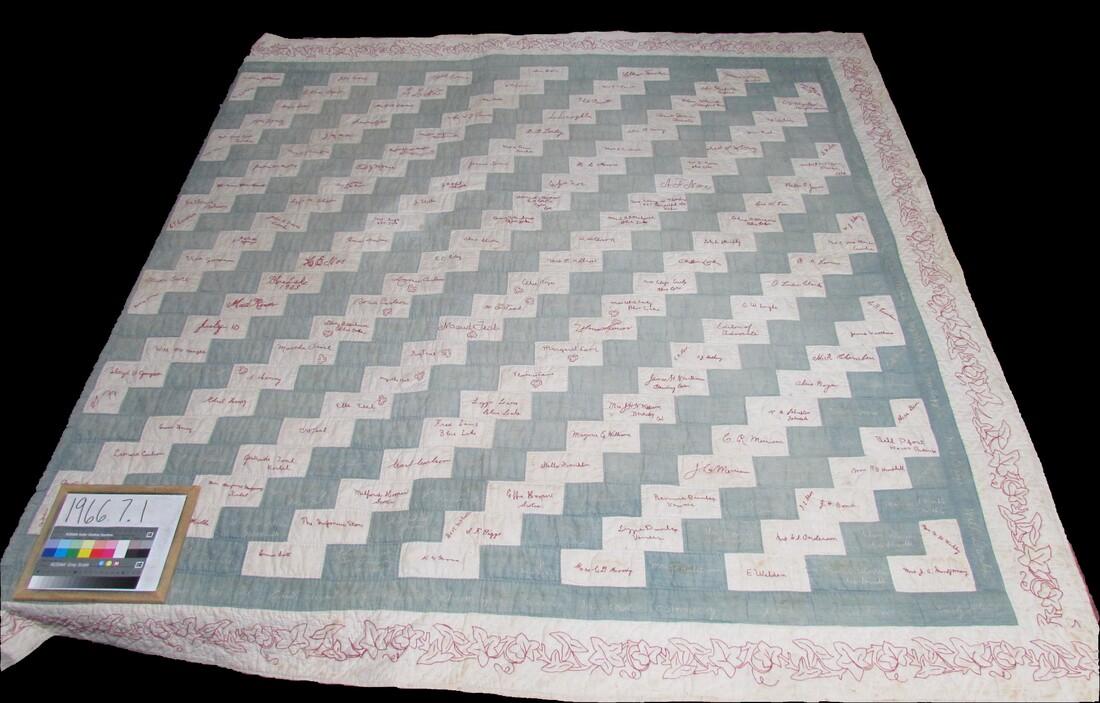 The Blue Lake Signature Quilt is in the ranks of fundraiser quilts- individuals signed their name on blocks, which were then embroidered over and stitched into a large quilt to auction off. The money raised was used to establish an Independent Order of Good Templars chapter in Blue Lake, promoting temperance and community in the rural town. 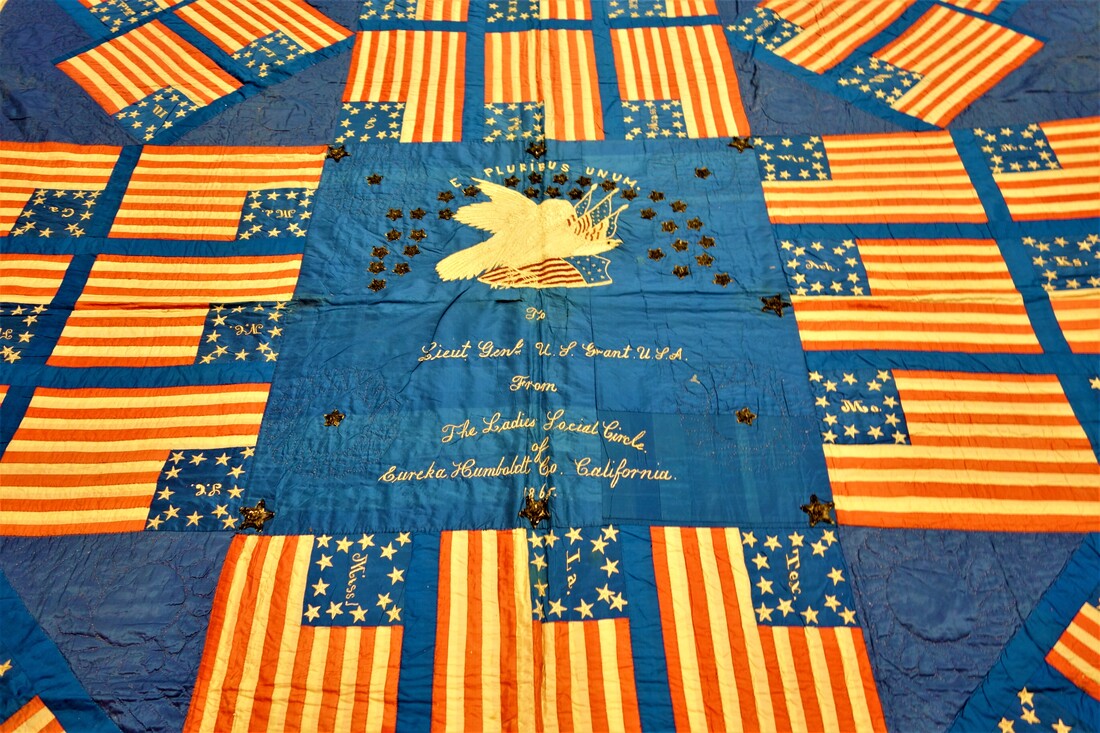 The Grant Quilt
The Ulysses S. Grant Quilt is perhaps the most famous quilt in the Clarke Collections- for good reason. This silk quilt was made by the Ladies Social Circle of Eureka in 1865 for an auction to raise money. The Circle's goal was to raise $1000 for the US Sanitary Commission, which worked to improve the healthcare of men fighting in the Civil War on the Union side. The auction was an unusual one by today's standards- the bidder who won the quilt would donate it back to be bid on again, with the cycle continuing until the quilt raised the money needed.
The center of the quilt reads "Lieutenant General U.S. Grant; by the Ladies Social Circle of Eureka, Humboldt County, California." The completed quilt, after the auction, was sent to General Grant with a list of the names of the creators and those who purchased and donated the quilt back.
The Quilt had remained with Grant's family until 1991 when it was donated to the Clarke Museum. 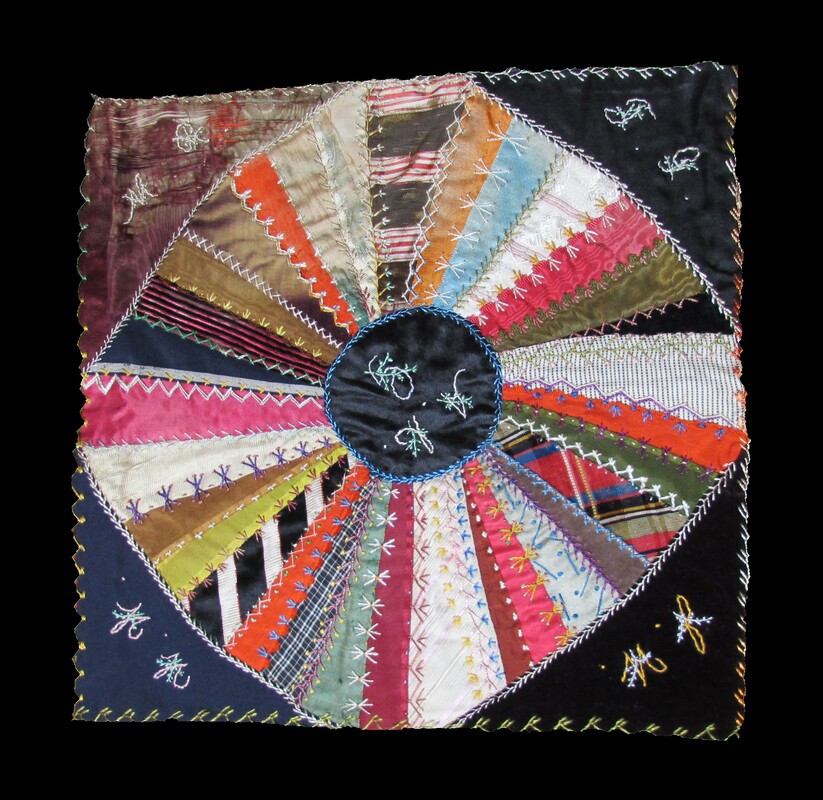 A block from the IOOF quilt
The IOOF Quilt is an unfinished Crazy Quilt in the Clarke Collection that features a multiplicity of blocks with the initials of the block makers. Based on notes from the donor of the quilt, it was made to be an auction quilt to raise money for a local chapter of the Independent Order of Oddfellows, a Fraternal Organization. For unknown reasons, it was never finished. 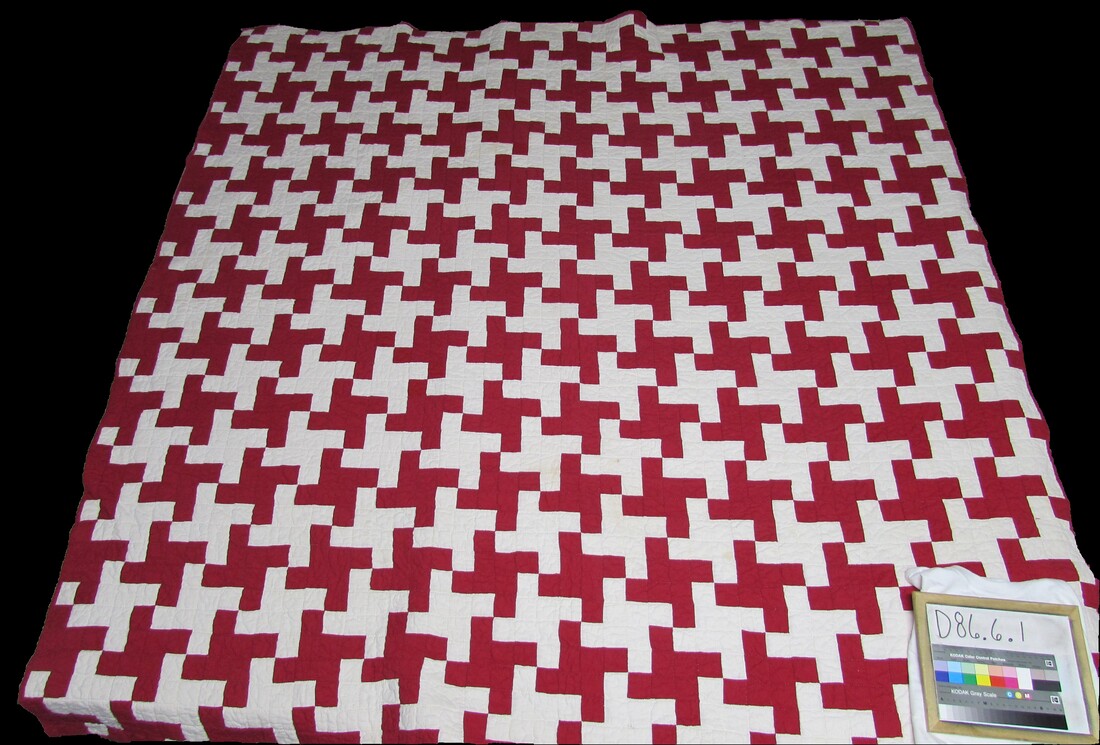 This quilt was made by Celia Norton, the  donor's maternal great great grandmother who also lived in Dows Prairie. According to our records, Celia gave the quilt away hoping to get rid of the hex she thought it had on it. It was made in the 1880s. 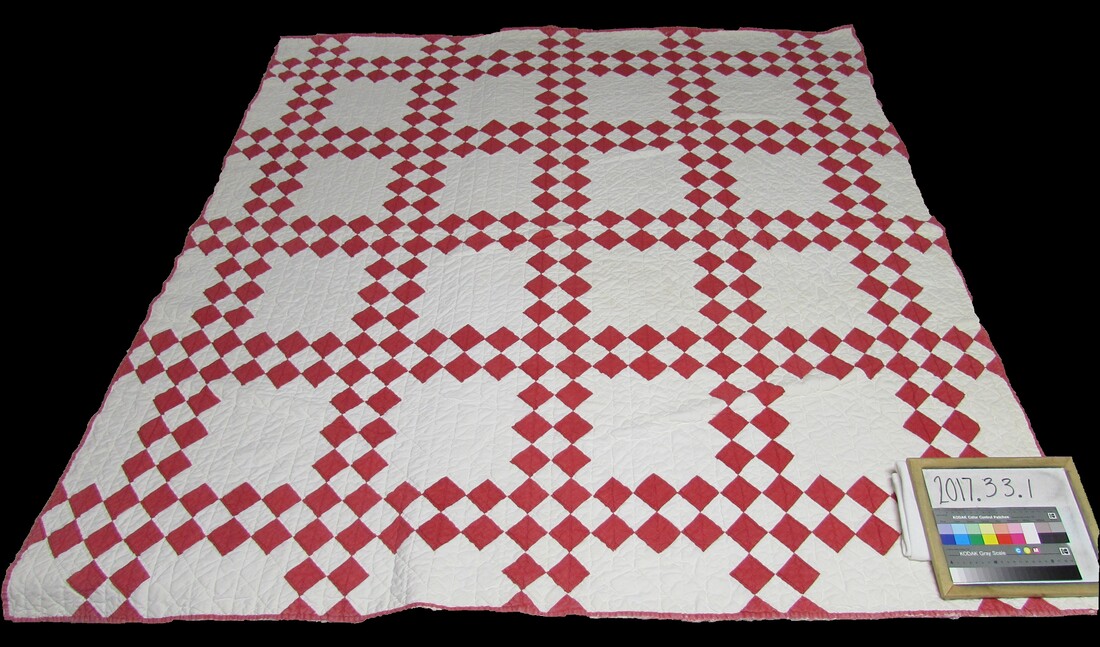 Quilts can and oftentimes are passed down within families as usable heirlooms meant to be cherished and loved.
A note included with this quilt states: "quilt made by Hannah Andrain-used by her, her daughter Meta Andrain Matthews. Hannah Andrain came to U.S from Sweden 1892. About 20 years old. Died 1947. Meta born-1901 died 1979" 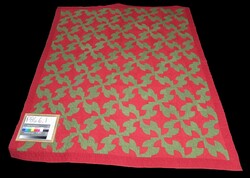 The Drunkard's Path quilt ​has a plethora of origin stories- from being a pattern to help escaped slaves to freedom to a pattern in support of the temperance movement. The pattern resembles the path of a dunk person on their way home from the bar, which is how it earned its name during the temperance period. Many of the temperance quilts were made specifically in a blue and white color scheme though. This quilt was made between 1880 and 1890.