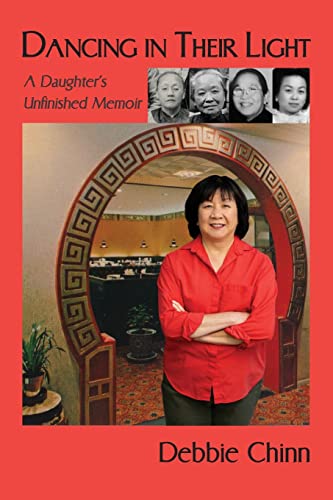 Dancing in Their Light: A Daughter's Unfinished Memoir

Debbie Chinn begins this colorful memoir by tracing her roots back to China. In the 19th Century a Southern Baptist missionary by happenstance started her family. Horrors of war, the Japanese occupation of China, the brutalities of starvation and poverty, and the Communist takeover of China in 1949 forced her family to flee their homeland, becoming immigrants in the United States.

They brought with them their specialized skills, connections, and a spirit of invention, all of which greatly contributed to this country's economic growth and reputation in the fields of science, engineering, medicine, nursing, research, aerospace, higher education, cultural diplomacy, and artistic heritage during the 20th Century. The broad influences of their achievements are now international in scope and still utilized today.

Her parents were pioneers in the Chinese restaurant and nightclub industry, therefore a commanding portion of this book is a prime seat to transport the reader back to the bygone era of fine restaurant dining and when Polynesian nightclubs were ubiquitous during the 1960s and 1970s.

Growing up in this environment, the author was a gawky teenager by day and a performer by night. Her childhood world was a restaurant playground encircled by an endless stream of food and liquor, nightclub entertainers, politicians, Catholic priests, Hollywood and Broadway celebrities, barflys, gamblers, sports icons, and the mob.

Dancing in Their Light is a colorful compilation of inspiring and unfathomable stories woven together by humor, pathos, confluences of fate, and the eternal guiding hands of her ancestors.