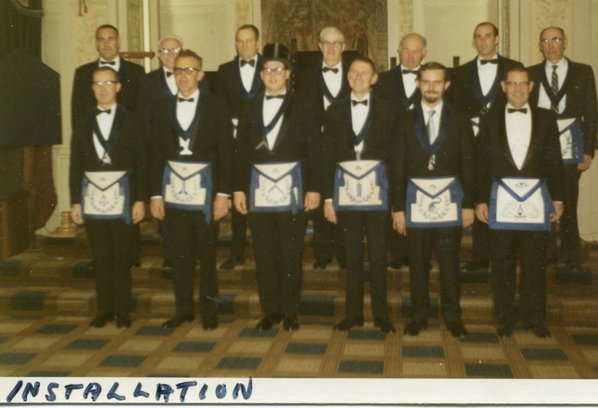 A group of new Masons at an installation ceremony. (Cat #: 2009.43.81)
From the very beginning, Freemasonry was incredibly popular in Humboldt County. According to Lowell S. Mengel II, the county’s first Masonic Lodge, Humboldt Lodge No 79, was founded in 1854. A second lodge, the Semper Virens Lodge was founded in 1923, after the Humboldt Lodge had grown to over 450 members in Eureka, which at the time had a population of 12,000. By 1928, Semper Virens Lodge had over 100 members and by 1955, 305 members.​
​
The Freemasons-sometimes shortened to Masonry-see themselves as the oldest and largest fraternal organization in the world. They trace the earliest Masonic ideas to the mason workers of Solomon’s Temple in the 5th century BCE and most of their ideals to the free-roaming freemasons of Europe in the 13th century. The Freemasons of today connect with this lengthy lineage by incorporating symbols representing the Temple and masonry tools, such as pillars, checkered floor tiles, and the iconic square and compass.

You can learn more about Freemasonry on the official Grand Lodge of California website here. 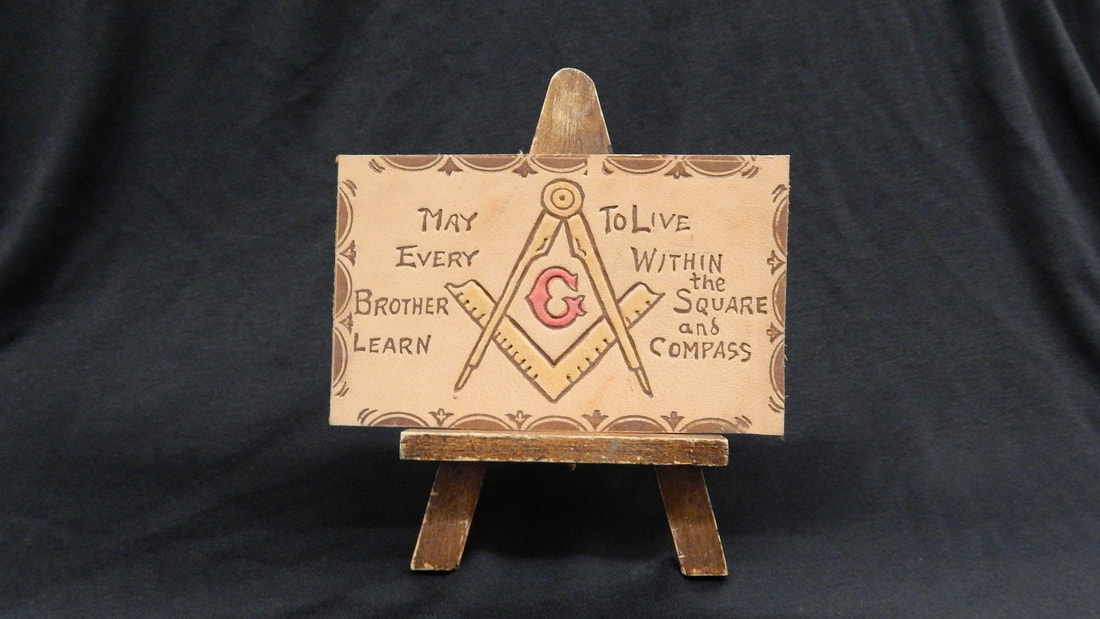 Leather Postcard, courtesy of the Humboldt County Historical Society
The square and compass are architectural tools, representing the lineage from the actual trade of masonry, while the G stands for “God” or “Geometry”. The G for geometry hails back to a time in the early centuries of the common era when geometry was a sacred form of math, and one that only certain people could learn it, such as stone masons who needed the geometry to construct buildings. The square and compass symbol occasionally appears on other appendant organizations to represent a connection with the Masons. With the development of Freemasonry over time, additional symbols were added such as the iconic All-Seeing-Eye. These symbols have historically appeared on ceremonial aprons worn by the Masons or on various art and architectural work created by the Masons

Over its long history, Freemasonry has sprouted countless other organizations, some that reinterpret the symbols, add new ones or are majorly influenced by other cultures. On display, we have items from a number of these groups, including the Free and Accepted Masons, Order of the Eastern Star, the Shriners, and the Knights Templar. These groups had at least one group within Humboldt County, but many of them had multiple lodges across the county. An appendant or Auxiliary organization is directly connected to another organization by requiring its members to be members-or related to a member- of the parent organization prior to joining. For example, prospective members of the Shriners must first be Master Masons before joining the Shriners.

It is notable that the Masonic and related appendant organizations like Job’s Daughters are greatly influenced by the Christian Bible in the organizations language, ritual and costuming. However, Masons do not declare themselves to be a religiously based group and discussions on religion, politics, and business are not allowed at meetings. The development of this organization has largely taken place in a heavily Christian-influenced Europe, which explains the prevalence of these religious symbols in a self-declared secular organization.

The Knights Templar, drawing their name from the famous crusading group, is an appendant organization of the Masons where members must not only be Masons but must be Christians as well. Their slogan is In Hoc Signo Vinces, which translates to “In this [sign] you will conquer”. Their symbol includes a cross with a crown, which is a widely used Christian symbol with many different interpretations. Examples of this symbol appear on the Templar's ceremonial swords, as seen below.

The Ancient Egyptian Order of Sciots, oftentimes shortened to simply to Sciots, was initially founded as an appendant order of the Masons. The founders wanted to create a place where Masons could come together without the rigidity of typical Masonic meetings and find more ways to apply many of the Masonic principles to everyday life. In Humboldt County, there was at least one Sciot group, the Eureka Pyramid, and many pictures of the Sciots are of the Sciot Band participating in parades and other social events, oftentimes in absurd costumes.

Freemasonry for the Whole Family

​Additionally, the symbolism and rituals in the Order of the Eastern Star draw heavily from the Christian Bible by including various female biblical characters such as Ruth, Martha, and Esther and quoting bible verses. However, as with a majority of other Masonic appendant organizations, a belief in a Christian God is not a mandatory requirement to join the Order, only a belief in a Supreme Being.