As with other immigrants, the Chinese brought traditions with them from China to Humboldt County. Those include cultural practices like traditional clothing and hairstyles, foods, family organization, and celebrations.
​The earliest mention in local papers of Chinatown in Eureka comes from 1874 regarding the community’s large new year’s celebrations. They also brought religious observances and structures that differed greatly from local traditions.
The Chinese had a distinctly different appearance, language, religion, and lifestyle from immigrants and Americans in the area, which made some residents of Humboldt County believe that the Chinese could never assimilate and didn’t have any interest in doing so.  Laws legislating discrimination against the Chinese helped encourage more rampant discrimination conducted by business owners, landowners, and other residents.

Following the completion of the transcontinental railroad and the decline of easily accessible gold from the Gold Rush, an economic recession descended on the people of the California. There were less available jobs and too many workers to fill those jobs, reducing the wages of workers and leading to restlessness in the working class. Labor unions began agitating against the Chinese, their work ethic, and their willingness to work for lower wages, which the union leaders believed had led to lower wages for everyone. Denis Kearney was a well-known anti-Chinese union leader who agitated against the Chinese in the expulsion period in Eureka before going to other areas and replicating Eureka’s 1885 expulsion event.

Additionally, around the expulsion period, newspapers took a noted dislike to Chinese immigrants, who were coming to cities in search of work. Many newspapers locally and nationally exaggerated the low wages of Chinese workers and the numbers of workers coming into the country, exclaiming that the Chinese would soon replace Americans in the country- a claim that was absolutely false. 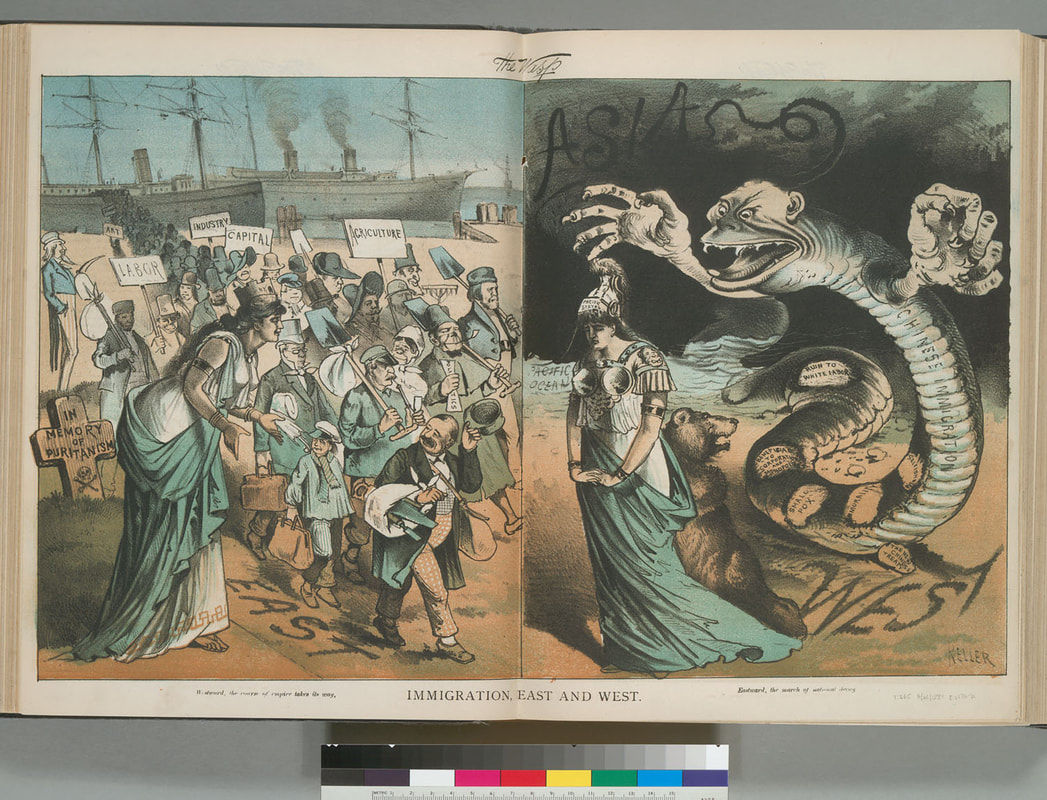 Political Cartoon from the Wasp titled "Immigration East and West" from the Online Archive of California
The Chinese immigrants faced a plethora of discrimination from residents in Humboldt County, as well as other regions in California and the United States. Early racism and stereotyping by fellow miners led to job exclusion and legislation against the Chinese fueled by labor unions under the incorrect impression that the Chinese immigrants were taking jobs from whites. Additionally, state, local, and national authorities implemented taxes and specific requirements that whites in the United States were not required to follow.

​In the days leading up to the expulsion, local papers note that there was an increase in gunfire in and around Chinatown between Chinese residents. The papers neglect to go into why the gunfights occurred, and instead wave them off as foolishness on the side of the Chinese. In one of these gunfights, two bystanders were hit- Councilman Kendall and a young boy. Kendall was killed while the young boy was hit in the foot by a stray bullet. Within an hour, word had gotten out about Kendall’s death and hundreds of people had assembled in the area. A meeting was called at Centennial Hall to determine what should be done. A committee, known as the Committee of Fifteen comprised of leading men in the city was formed to speak with the leaders of Chinatown and tell them that the Chinese had 24 hours to pack up their things and be out of Eureka.
​Following the Eureka expulsion, the Committee of Fifteen encouraged other towns in the county to expel their Chinese residents. The expulsion was praised as so thorough that not a single Chinese resident remained in the county- a myth that was widely expressed for decades after the event. Local papers listed the names and businesses of the organizers for the Eureka Expulsion, encouraging readers to support their businesses and endeavors in thanks for their service on the Committee of Fifteen.

There were local individuals who supported the Chinese community, however, this was a widely unpopular stance and was not largely supported in the local press at the time. Reverend Huntington was one person who appears in the record as a supporter of the local Chinese community, offering classes to students and helping to save one of his students from being hanged by an angry mob thinking that the student, Charley, was trying to hide during the 1885 Expulsion.  Another man, mentioned only as Rich the Minister of the Methodist Church, also spoke out against exclusion at the meeting immediately after Kendall was shot.
​Huntington recorded in his journal that someone at the Centennial Hall meeting following Kendall’s death proposed massacring everyone in China Town, which was declined. The next proposition was to loot and burn China Town, forcing its residents into the forest around the town and leaving them to the elements.
​Sheriff Brown spoke at the meeting following these propositions, saying “Before anything there was done, I want you to understand that I am Sheriff of Humboldt County, sworn to uphold the law and I will do so to the end. That if anybody starts anything violating the law, they’ve got to reckon with me and my deputies”. He also called out the National Guard to protect the prison where 20 Chinese men accused of having been part of the gun fight that killed Kendall were being kept. This was the first time the National Guard was called out locally since Eureka was founded.
Between 1882 and 1905, Chinese individuals throughout the country filed more than 10,000 federal lawsuits, with 20 of them being sent on to the Supreme Court, including Yick Wo v. Hopkins in San Francisco, which required permits for the operation of laundries- all 80 white applicants were permitted and none of the 200 Chinese applicants were permitted. United States v. Wong Kim Ark was another case which cemented a key point in US immigration- Wong Kim Ark was born in the United States to two Chinese parents who, due to their being Chinese at a time when Chinese individuals could not become naturalized Citizens, unlike immigrants from other areas.  Ark left to visit family in China and was denied reentry, so he took his case to the courts, which established an important precedent for the 14th amendment, which in part grants US citizenship to those born in the United States, even if their parents are not legal citizens. A big part of why this ruling was not challenged was because it would greatly complicate citizenship for a large portion of the population, including those with parents born in Europe.

​Following this, a plan was formed by the Committee of Fifteen to keep watch at the Bay and ensure that any ship with Chinese individuals on board would not be permitted to dock.

Charlie Moon: The Only Chinese Man in Humboldt County

Papers inside and outside of Humboldt County praised the county's continued efforts to keep the county Chinese-free after the 1885 and 1906 expulsion events- however, some papers did concede that the county did have one Chinese resident- Charlie Moon.

The Story of Ben Chin