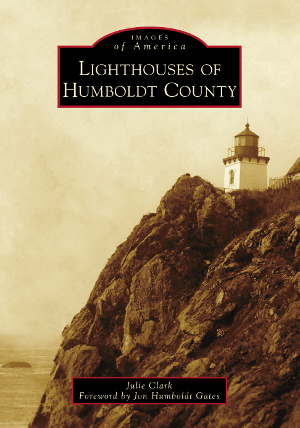 from the Images of America series

The impenetrable coast of Humboldt County has been a historic navigational conundrum for sea captains since the 16th century. The Humboldt bar crossing, the lack of safe harbors, the storms, the unpredictable seas, and the rocky shores caused tragic shipwrecks, drownings, and maritime disasters. Beginning in 1850, the Department of the Treasury funded the construction of 11 lighthouses in California, including the Humboldt Harbor Lighthouse, the first one in Humboldt County. Due to its poor location in the sand dunes, the lighthouse was abandoned in 1892. New lighthouses were built in more appropriate locations such as Table Bluff, Cape Mendocino, Trinidad, and Punta Gorda. An increase in population on the north coast resulted in the reliance on passenger schooners and freight vessels, making these lighthouses critical to Humboldt County’s economic stability and success. The Trinidad Head Lighthouse is the only one in operation today, yet the lighthouses of Humboldt County and their keepers remain integral to California’s maritime history.